Eastern Africa is home to some of the world’s fastest growing economies. Foreign capital has streamed into this region over the past ten to fifteen years – into large infrastructure programmes consisting of roads, railways, ports and pipelines, and into large resource developments ranging from geo-thermal in Kenya’s Rift Valley to windfarms in Kenya and neighbouring Ethiopia, and oil and gas projects in Uganda, Kenya and Tanzania. New motorways, shopping centres and office towers are sprouting in the region’s capital cities – a testament to the new wealth that is flowing in and being created.

Yet much of the large investment happens in rural areas – places distant from political and commercial centres, where the state let alone multi-national capital has rarely made itself felt. Many of these areas also have complex conflict legacies, and elaborate locally-specific ways of managing conflict and making peace. That is the genesis of a recent project on ‘Large-scale resource development at the rural margins’ – to understand what happens to governance and conflict in remote rural areas where large new developments are unfolding. 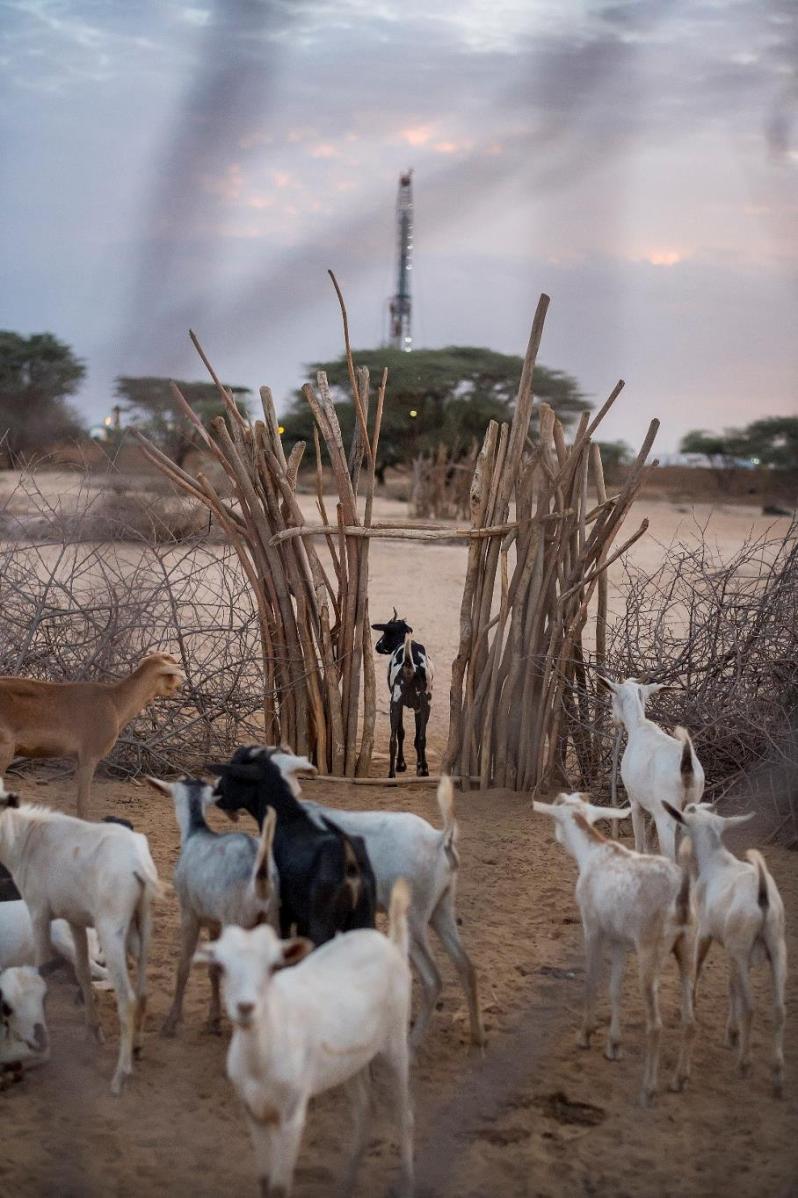 Turkana in northern Kenya is one such place – it is the country’s poorest county, yet also on the cusp of social, economic and politics-altering oil development. Oil exploration and appraisal operations since 2010 by London-based Tullow and Africa Oil – a Canadian firm – have spread to more than 30 well pad sites, and an operations base outside the area’s main town, Lokichar, complete with air conditioned offices and accommodation for over 100 workers, an airstrip, and café stocking Magnum ice cream bars and the Daily Mail. Over the coming years, further investment of up to $8 billion is anticipated to develop Turkana’s oil fields. It will soon host Africa’s first drone airport, alongside a network of pipelines to transport the oil for future export.

The photos featured in a current exhibition at the Institute of Development Studies (and featured in a digital story) capture what life looks like at the heart of Turkana’s oil development, showing how an ongoing transformation of eastern Africa appears in one rural place. To be sure, oil is not the only game in town. The past fifteen years have brought universal primary education, a mobile phone network and access to banking services, a social transfer scheme for Turkana’s poorest residents, a new county government structure, and most recently, electrification in Lokichar.

Thus, Turkana residents are navigating the impacts of oil at a time of intensifying change. This is not a story of rural insurrection and resistance against the oil company. It is not about widespread environmental harm and land grabs. In fact, a majority of Turkana welcome the oil development and its potential to contribute to the region’s economic prosperity.

But, otherwise, a unified Turkana view is hard to find. Many tensions now turn on competitions between different interest groups to secure greater benefits – compensation for land takes, local employment opportunities, and tenders to supply goods and services to oil investors and large sub-contractors. This jostling goes all the way down to the village level – with members of neighbouring villages insisting on their own allocations and separate negotiations with oil investors. The loudest voices, those with the sharpest elbows, are the ones heard. Many are left out.

Oil investors have had to negotiate on a case by case basis with communities nearby to oil wells – seeking deals with local elders, traditional authorities and other local prominent people. At the same time, new groups and activist voices have emerged to pressure for greater benefits, rights and accountability – even challenging elders as well as political representatives in national and county government – many of whom have set up their own local companies to get in on the tendering action.

So the prospects for oil development in Turkana are uncertain. The direct benefits are few and thinly spread, even while a narrow elite captures unimaginable wealth with much more coming down the pipeline. In this sense, the story of oil development in Turkana is to glimpse into the condition of wider society – accelerating economic change, vastly expanding inequalities, and new and changing voices coming to the fore of politics and the court of public opinion.

Jeremy Lind is a Research Fellow at the Institute of Development Studies and a member of the PASTRES research team.