PASTRES is working with pastoralists in six case study sites around the world, to discover how they are responding to uncertainties.

Click on the map or the links below it to browse the cases. The site maps within each case description can be viewed at full size by clicking on them. Case maps credit: John Hall 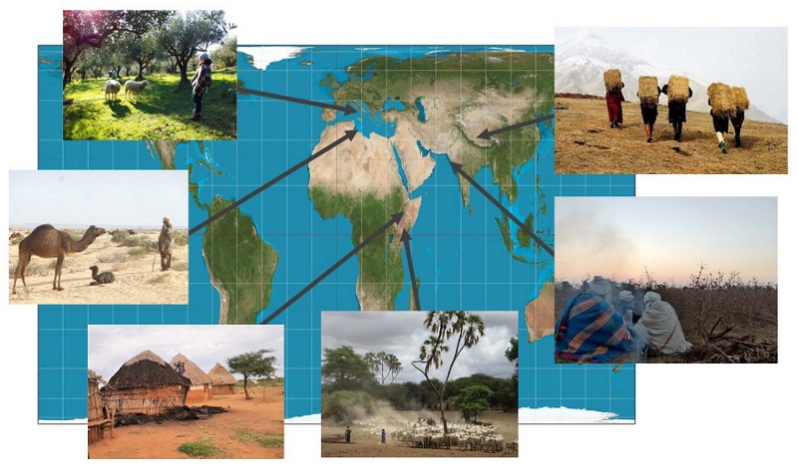 However, pastoralism has dramatically changed in the area over the last 30 years. There has been a growing privatisation of rangelands, wells and water points, alongside settlement and growth of crop production, although the wider transhumant system persists, and is important for those with very large, commercial herds, managed by hired herders. A process of social differentiation has accelerated in the past decades, with significant out-migration from the area and important gendered impacts.

Many Borana pastoralists now combine agriculture with small-scale livestock production, often linked to off-farm activities in small towns. In the last decade new investors have also been acquiring land in the region, removing irrigable land for large-scale agricultural estates, livestock ranching and mining, as well as investments in renewable energy wind power schemes. The region is in much flux, and has been subject to episodic periods of violent conflict over particular ‘key resources’ for grazing or agriculture, linked to a process of securitisation.

END_OF_DOCUMENT_TOKEN_TO_BE_REPLACED

China’s rapid economic growth, including towns and cities in the region, has shifted economic incentives, with opportunities for out-migration from pastoral areas growing. There has been increasing marketization of the traditional pastoral system, focused on yak and sheep production.

In addition, state policies have encouraged individualisation and privatisation of rangelands, which has dramatically affected transhumant montane system. New institutional structures have been imposed, which encourage a more individualised, settled livelihood, connected to the market. State-led environmental policies aimed at protecting watersheds and other ecosystem services have encouraged destocking, sedentarisation and the seeking of alternative livelihoods.

Some have benefited from these changes, but not everyone. A process of social differentiation is on-going, with major age and gender consequences. This has resulted in changes in livelihoods, with greater diversification, resulting in new links to pastoral production. Responses to marketization, combined with population pressure, have been varied. In some areas, there have been innovations that aim to reinstate the benefits of communally-managed rangelands, through innovations in the individual quota system. Meanwhile, climate change is predicted to result in greater variability in temperature and precipitation as well as local natural disasters, with consequences for both ecology and economics.

END_OF_DOCUMENT_TOKEN_TO_BE_REPLACED

Sardinia is a major centre for pastoral production in Europe, notably sheep, but also cattle and horses, involving transhumant movement to mountain pastures in the summer. Sardinia is a traditional pastoral society within the Mediterranean setting, providing important employment and income earning opportunities.

Over the last century the pastoral economy has undergone many changes, but remains as the main driver of the Sardinian economy, in terms of production and service provision. Initiated by Roman investors in the late 1800s, 60 percent of Sardinia’s famous Pecorino Romano cheese is exported. In recent decades traditional pastoral systems have undergone important restructuring, with socio-economic and environmental implications, including significant outmigration and changes in ecologies due to shifts in grazing patterns. Increasing fodder and input prices have seen a recent shift back to extensive production.

After a period of crisis, elements of the pastoral system have revived in recent years: new small-scale producers have started up businesses; there is a greater involvement of a foreign, migrant workforce in herding; the agro-pastoral economy has diversified and there is an increasing interest in high-value nature conservation linked to ecotourism, as Sardinian agro-pastoral landscapes represent a major attraction for tourists visiting the island.

END_OF_DOCUMENT_TOKEN_TO_BE_REPLACED

An arid border district in the Western Indian state of Gujarat, Kachchh is home to several pastoralist communities, including India’s biggest nomadic group, the Rabari.

Traditionally camel herders, the Rabari now also keep cattle and sheep and goat. They mostly graze on farm residues and share close relationships with farming communities. They migrate for 6-9 months a year, and longer depending on rainfall conditions, covering distances of about 300 – 3000 kms. They earn most of their income through the sale of milk and the sale of animals for meat, both practices considered sacrilegious in the past.

Following a massive earthquake in 2001, Kachchh has experienced rapid changes from large-scale industrialization, agricultural expansion, and growing tourism. One of India’s fastest growing regions, after the earthquake Kachchh was used as a laboratory for ushering in a new style of development that is now being deployed at a national level. This spatial transformation has generated new opportunities and challenges for pastoralism, affecting not only livelihood practices, but also pastoral identity, social dynamics and aspirations.

END_OF_DOCUMENT_TOKEN_TO_BE_REPLACED

About 40% of Ethopia’s landmass is accounted for by drylands, where pastoralists live and work. The dryland system in Ethiopia is characterized by rainfall patterns that are highly variable in time and space, making pasture and water availability for livestock unpredictable. The Borana region is one extensive pastoral system in Ethiopia, where pastoralists have evolved many strategies over the centuries to respond to risks and uncertainties.

Recently, livestock insurance has been introduced to help pastoralists in Borana deal with climate-related risks, particularly drought. This ‘financialization of risk’ includes a product called index-based livestock insurance (IBLI), a unique institutional intervention for the pastoral population. IBLI was introduced in Borana based on the assumption that a significant risk in the area is rainfall variability – both in terms of time and space. IBLI uses satellite-based forage monitoring, and aims to make payouts to individual pastoralists before the underlying ‘risk’ – drought – happens, when it is estimated forage condition in an area will fall below a certain triggering threshold.

The research in Borana will explore the extent to which livestock insurance has been combined with other responses to risks, and how pastoralists perceive the different risks they face – with implications for policies and strategies related to disasters, risks and risk financing in the region.

Blog: The financialisation of risk in Ethiopia’s drylands

END_OF_DOCUMENT_TOKEN_TO_BE_REPLACED

Tunisia is characterized by diverse climatic and ecological regions, from the Mediterranean maquis in the north to the Sahelian strip in south east, and the Sahara desert further south. Pastoralism in Tunisia is as diverse as the agro-ecological regions in which it is practiced. Rangelands constitute nearly 30% percent of Tunisia’s land area, 87% of which are in the arid and desert areas found in the southern regions, where 70 % of households hold small ruminant flocks for their subsistence.

It is argued that failed land collectivization post-independence, followed by the privatization of collective lands and neoliberal schemes to liberalize agricultural markets, have deeply affected agricultural productivity and reshaped access to rangelands in the last 40 years. Public intervention and investments have concentrated on areas with higher agricultural and tourist potential, crowding out natural resources used by pastoralists and further deepening inequalities. The historic polarizations between coastal urban regions and rural internal regions is an important characteristic of Tunisia’s political economy.

The marginalization of southern regions, coupled with institutionalized clientelism largely explain the build up to the revolution in 2011, which began with protests in the phosphate mining areas of southern Tunisia. These regions are characterised by high unemployment and coincide with important pastoral zones. Today, high rates of outmigration from these regions to urban centres are continuing to reshape pastoral livelihoods. Many pastoral communities rely on remittances from emigrated members while diversifying income streams by undertaking extremely varied and variable off-farm activities and waged labour.

On the other hand, many see opportunities in the rural south by strategically investing in irrigation and expanding livestock herds to meet food demands in Libya and Algeria. Whether outside investors or migrants, through accumulated capital and remittances, these ‘absentee’ actors are further reshaping and reshuffling local resource distribution with likely impacts on social differentiation.

Tunisia is undergoing a process of decentralization. The political climate post-revolution may provide opportunities to revise open access regimes and ensure communal rangeland management practices are maintained. However, whether these will be equitable and redistributive remains to be seen.

END_OF_DOCUMENT_TOKEN_TO_BE_REPLACED 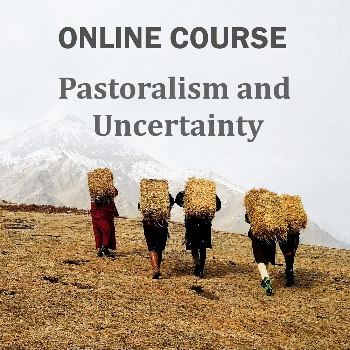