Pastoralists  in Isiolo county in northern Kenya feel under siege, with their way of life under threat. Isiolo has been the home of the Waso Boran pastoralists for many decades, but attacks from neighbouring Somali herders, encroachments by agriculturalists from Meru, expansion of conservancies and planned road, pipeline and resort city mega-projects are affecting all pastoral livelihoods, creating many new risks and uncertainties. One elder warned us: “We were the majority in our area, but now we are becoming a minority. This means conflict is coming”.

In a scoping visit for the PASTRES fieldwork in Kenya, the PASTRES team talked to many people. Government officials in town, local experts and activists and pastoralists at water points and other meeting places. A number of themes emerged, each of which highlight different dimensions of uncertainty.

Environmental uncertainties were commonly mentioned. Droughts, it was claimed, occurred every couple of years these days, compared to every five in the past (although this year the rains have been plentiful). Market uncertainties were important too, with access to markets for milk, meat and live animals regularly discussed. But it was political and institutional uncertainties that dominated the discussions. Disputes with neighbours and the planned expansion of investments, including the LAPSSET corridor and the Northern Rangeland Trust (NRT) conservancies were hot topics.

The LAPSSET (Lamu Port-South Sudan-Ethiopia-Transport) corridor is planned to come through Isiolo, with the town earmarked for major investments. Already there is an airport, although very few planes. The new road to Moyale has reduced travel times dramatically. Detailed plans for an exotic ‘resort city’ exists, but the site remains non-descript bush. And land speculation along the proposed corridor route is rife, with rumours that big politicians and business people are buying up land along its route. As you drive along the road out of Isiolo the land is pegged with stones and painted markers. Disputes across county boundaries have accelerated as well-connected Meru politicians argue for it to come closer to Meru rather than through the middle of Isiolo county.

While the LAPSSET corridor remains more on paper than on the ground, its effects are real, as speculation increases. More tangible are the expansion of ‘conservancies’, led by the Northern Rangeland Trust. A number exist and more are proposed in the county. These are areas where tourist investments are focused and pastoralists gain opportunities for marketing and jobs as guides and guards. Conservancies create a securitised area in the rangelands, excluding others, and with a private armed force securing the boundaries. For some they are attractive, offering security in the face of on-going attacks from well-armed neighbours. But for many, conservancies represent another form of land alienation, as dry season grazing and water resources are expropriated. While the NRT rhetoric is focused on inclusion and participation, many in our discussions see this as another attack on pastoralism from outside, supported donor finance and political support.

As the northern ‘frontier’ (Isiolo is actually in the middle of the country) is opened up by infrastructure and development efforts, many see opportunities for speculation and investment. Everyone, that is, except pastoralists themselves, who often see themselves as helpless by-standers; now the minority in their own land. Opposition is growing however, and young people in particular have taken to WhatsApp and other social media to mobilise among their own communities. For sure, these developments will throw up many uncertainties – and conflicts – over the coming years.

One more positive aspect of the policy attention to the northern dryland areas has been the improvement of roads and communications connections. The main roads are now much improved, and even some of those to the interior areas are being upgraded. Across the county you can get mobile phone signals more or less anywhere. Combined with the availability of cheap (US$800) motorbikes, now ubiquitous in every corner, the prospects for marketing have improved dramatically.

Much marketing is informal: using mobile phones to check supply, demand and prices and using motorbikes to transport from producers. The county is criss-crossed by motorbikes carrying camel milk, live animals and other products to urban areas and consumer goods back again. This rapid, efficient marketing is especially important for camel milk, which in the absence of refrigeration goes off. Camel milk marketing is booming, with an estimated 10,000 litres of camel milk delivered in 2-10 litre plastic jerry cans to Isiolo daily.

A number of wholesalers take it, cool it and send it to Nairobi or sell it in retail outlets locally. Payments are transferred by phone through the MPesa system, making sure everyone gets paid more or less immediately. It is an impressive operation, generating significant income for all along the value chain. And only feasible because of newly available, cheap technologies (bikes and phones) and improved road and communications infrastructure. 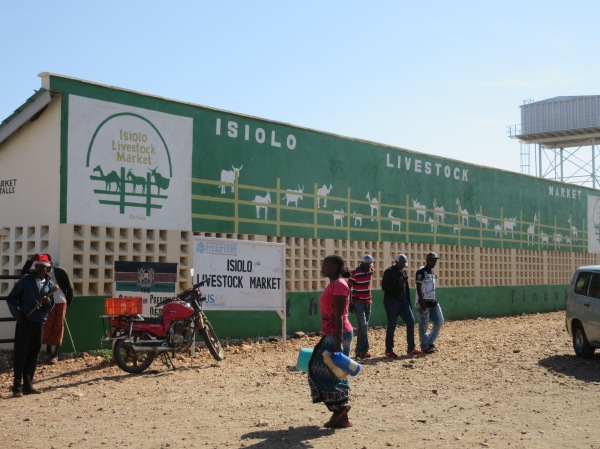 Aid projects have also invested in marketing, with nine newly-built livestock markets in the county. They are impressive facilities with relatively low cost access. Some have been placed in unsuitable locations apparently and are not being used, but the one we visited in Isiolo town was busy, facilitating trade in livestock out of the county, bringing much-needed revenue back.

Only some are able to make use of the opening of marketing opportunities, however. Camels are large assets and a milking herd is only available to a few. The same applies to offtake from cattle herds, which are skewed towards females to ensure rapid growth and milk production. For poorer pastoralists it is goats and sheep that are the mainstay.

Livestock ownership patterns are changing, with shifts in species and increasing differentiation in holdings. Boran pastoralists were traditionally cattle keepers, and in the past few had camels. This is changing, as many see the advantages of camels, being able to go without water for ten days or more, and feed in far off, dry pastures. Cattle are seen to be much more vulnerable to drought, with major die-offs seen in 2011 and again in 2016. Goats and sheep meanwhile continue to be popular with everyone, as they are able to respond to changes and require less herding labour.

Over 40 years ago, Swedish anthropologist Gudrun Dahl studied pastoralism in the very areas where PASTRES is working in Isiolo. Her 1979 book, Suffering Grass is a classic. Together with her husband, Anders Hjort, she also wrote the marvellous book, Having Herds (an inspiration to me as I started out on my PhD in the 1980s) about the social ecology of herding in Africa (and especially northern Kenya).

Much has changed since then, but the rationale for pastoralism producing the ‘three sweet milks’ – from cattle, camels and smallstock – still applies, but today in different combinations, with different values and markets. Equally, the principles of pastoral mobility and herd splitting to respond to variable rangeland, making use of the Dedha system, separating grazing into wet and dry season and drought reserve grazing, still apply, but again much adapted.

Production rationales and practices must adapt to change, responding to new uncertainties and taking advantage of new opportunities. In explaining the current systems, there was much debate amongst pastoralists we talked to. Some argued that the ‘traditional’ resource management systems needed to be revived to sustain current production; others argued that things had changed to such a degree that everyone today made their own way, without recourse to community-sanctioned regimes. Certainly, the labour regime has changed a lot since the mid-70s. Back then, following the Shifta war of the 1960s, some had moved to small towns, but also maintained mobile pastoral camps. Today, the movement to towns has been substantial, and they have grown many times over.

Attracted by the opportunities of schooling, religious education, electricity and other facilities, most herd owners have homes in towns such as Kinna, Kulamawe, Garba Tula or Merti. Women and children live there permanently and few are involved in day-to-day livestock management. Men may travel to supervise hired herders (sometimes including relatives) in make-shift camps. Herders sleep in the open, next to the kraals and the enclosures that keep the kids and lambs, but few bother to construct waterproof round huts; formerly a major task of women in camps.

And today, herders have to be on the look-out for raiders, livestock rustlers and others. The flood of small arms that have arrived from Somalia and South Sudan make the rangelands a conflict-prone and sometimes dangerous place.

While it is of course a myth that pastoral societies were once egalitarian, patterns of differentiation have certainly changed – by class, by age, by gender. Owners of large numbers of livestock can run different herds/flocks in different places with different resource access, and making use of hired labour, while other poorer pastoralists must stay with their animals, probably close to town, meaning smallstock are the only option. Still others have no animals at all, or only a few, and stay in town, seeking other opportunities.

This process of social differentiation, (semi)urbanisation and proletarianisation is accompanied by out-migration. Children who go to school aim to leave the area, many permanently. Many older male pastoralists wondered what would happen to their herds when they passed on. Would their children manage them by mobile phone from Nairobi, or would they sever ties with pastoralism altogether?

With women moving to town and reducing inputs into herd and flock management in camps, they have often taken up other income earning activities, notably marketing. Nearly all the camel milk marketing and much smallstock marketing across the county is run by women, for example. Combined with petty trade and provision of services in small towns in pastoral areas means a more diversified income, especially as the core pastoral system becomes more constrained.

Another feature of contemporary life in pastoral areas is aid and development. This also has impacts on differentiation, and how different people cope. The proliferation of sign-boards across the places we visited was amazing. A veritable alphabet soup of acronyms and a litany of logos adorned these. The buzzwords of resilience, livelihoods and climate adaptation were everywhere. The archaeology of aid in dryland areas tells a sorry tale, with misguided interventions failing repeatedly. This hasn’t changed, but it does affect how people respond to uncertainties.

The opportunity of hooking up with a ‘project’ is enticing, as is the dependency on hand-outs from humanitarian agencies. While there have certainly been major crises in the area over the past decades requiring external support, the sense of overlapping, uncoordinated and sometimes pointless interventions is rather overwhelming. With expectations from the state heightened by devolution, and local benefactors appearing prominently at election times, the cycle continues. How this influences the local moral economy, and more traditional and religious approaches to support, care and sharing is something is worth exploring further. 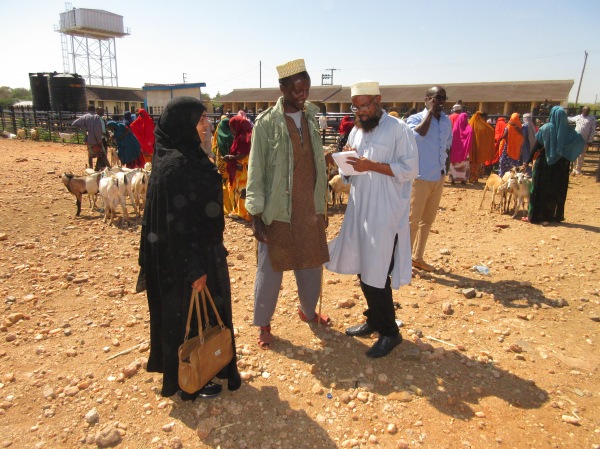 Perhaps surprisingly, despite all these major changes in environments, in market conditions and in political and institutional settings, the basic principles of flexible, opportunistic pastoralism in a non-equilibrium environment remain.

Mobility, herd diversification and splitting, linked to non-pastoral income earning, were all evident 40 odd years ago when Gudrun Dahl was doing her research in these same areas. But today, such responses to uncertainty have changed, with new practices and institutions emerging, affected by a complex combination of internal and external factors.

What these are and how this affects pastoral societies will be a major focus of PASTRES research over the coming years. Watch this space for more updates!