What can we learn from the way pastoralists deal with uncertainty?  This powerful question, at the heart of PASTRES’ work, immediately resonated with me. Observing pastoral dynamics here in Jordan, where I currently live, I began asking myself: What are the conditions for pastoralists’ continuous adaptiveness? Is there not a point where we can say that there is simply no more space for adaptability?

This question came to me after a discussion I had with Professor Abu-Zanat.  “If things don’t change”, he said, “in 30-40 years, there won’t be any more pastoralists in Jordan”. This assertion came as a big shock.  In the Middle East, pastoralism has a history of nearly 9,000 years! And as a professor who has been carrying out extensive research on rangeland and livestock in Jordan and the Middle East, Mahfouz Abu-Zanat knows what he’s talking about.

The Levant region provides a compelling illustration of the resilience of pastoral populations in contexts of uncertainty. Besides the water scarcity caused by the hot and arid weather,  with average annual rainfall between 50 and 150 mm, the region experiences strong annual climatic variations.  Pastoral nomadism, which has been traced back to the 7th millennium BCE, has been an essential ingredient of adaptation to the spatio-temporal changes in vegetation and water availability. With water scarcity, rangeland degradation, poor biomass production and climate shocks having worsened in the past decades, pastoral mobility remains critical. Yet moving around in search of natural pastures has become increasingly difficult. Below I outline some of the drivers influencing pastoralists’ shrinking space of adaptability.

Although rangelands are said to account for 80 to 90% of the country’s landscape, significant portions of this “open-rangeland” have been enclosed for speculative or private ventures.  Jordan’s population has doubled in the space of 15 years, a demographic growth accelerated by the flow of refugees from neighbouring countries: Syria and Iraq mainly, but also from Yemen, Sudan and Somalia. Combined with the rapid development of agribusiness, industry and construction sectors, the sprawling urbanisation that has ensued has triggered a sharp increase in land prices and resulted in decreased availability of rangeland for livestock grazing.   Most of the water used in farming is also in private hands, with rich businessmen acquiring or renting wells and reservoirs and then selling the water to agropastoralists.

(Al Himma Hot Springs. Prior to their privatisation, the springs were used by local farmers. Credits: Mathilde Gingembre)

Severely degraded, today Jordanian rangelands hardly provide 15% of animal feed. With the nationalisation of land in Jordan, traditional ‘tribal’ systems of land control have been eroded, leading to problems of uncontrolled early grazing . The increasing use of trucks to bring water to the herds further decreased incentives for seasonal transhumance, concentrating animals and accelerating the degradation of natural pastures.

Agricultural policies have also been encouraging Bedouin pastoralists to keep large numbers of animals. Significant state subsidies on animal manufactured feeds have long been provided to livestock owners. Under pressure from the International Monetary Fund, the government of Jordan suddenly stopped feed subsidies in 1986, a shock to which Jordanian pastoralists responded to in a variety of innovative ways. Subsidies have since then resumed, but their uncertainty makes it hard for livestock owners to make stable economic predictions.

(Manufactured feeds are a mix of low quality barley and other cereals. Credits: Anas Amarneh)

Neoliberal policies have also resulted in challenging international competition for Jordanian pastoralists.  Jordan is importing roughly 700,000 head of live animals per year. Most of them come from Romania, Australia, New Zealand and Brazil. This is a tough competition for Jordanian livestock owners. On local markets, a 25 kg Baladi (local) sheep is sold for 160Jd, whilst a 35 kg Romanian sheep is sold for 130Jd.  This can be explained by the fact that a major company holds a strong monopoly on live animal transportation and imports to Jordan. These imports are sometimes framed as filling a gap, with regards to Jordan’s low ratio of self-sufficiency for meat products (34%).

What this number obscures is the fact that the country is simultaneously exporting 500,000 live animals to Saudi Arabia and the UAE per year, where high sale prices can be realised. Whilst livestock international trade business owners may be benefiting from this, poorer pastoralists who sell on the Jordanian markets are forced to lower their sale prices to compete. 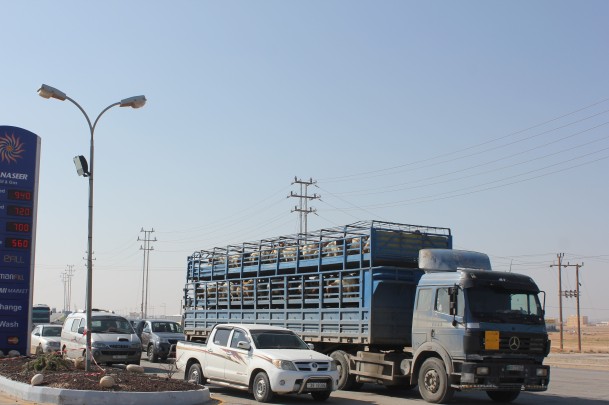 (Goats and sheep being trucked to Saudi Arabia for sale. Credits: Mathilde Gingembre)

Of all the causes of unpredictability for pastoralists in the Levant, regional insecurity certainly features highly. In the past thirty years, Jordan has been neighbour to many wars: from the Gulf war in the 1990s,  to the current war in Syria,  the Iraqi war that followed the American invasion (2003-2011), the 2006 Israeli-Lebanese war and the Iraqi war with ISIS (2014-2018). And this not mentioning the protracted Israeli-Palestinian conflict and recurring clashes in the Egyptian Sinai. Although the Hashemite kingdom has remarkably remained spared from all the violent turmoil, this regional context is so pregnant that it shapes pretty much every aspect of Jordan’s history, economy, politics and diplomacy and affects the everyday life of its people in significant ways. 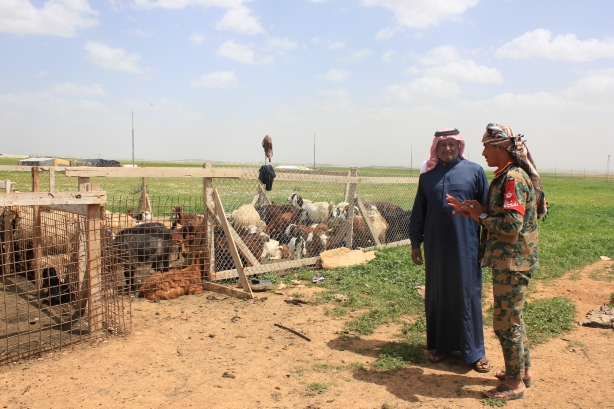 As far as the Syrian crisis is concerned, Jordan is one of the most affected country with the second highest share of Syrian refugees compared to its population (nearly 10% of its population). Despite the camp policy implemented by the Jordanian state, 80% of Syrians live in “host communities”, in the north of Jordan mainly. With the war in Syria now entering its eighth year, the government of Jordan and humanitarian agencies have shifted their focus from emergency response to longer-term interventions, with a strong emphasis on promoting livelihoods and enhancing resilience. With Jordan’s fast-paced urbanisation and industrialisation, agrarian livelihoods are not at the top of people’s agenda however. Despite the fact that small ruminants are often the sole source of income and food security for many rural households, very few agencies are supporting those who are living from livestock. Lack of information might be to blame.

For pastoralists, this context of regional insecurity translates into varying challenges. There is the pressure that the successive waves of refugees have put on public services and on natural resources. Additionally, Jordanian pastoralists suffer from the closure of seasonal migration routes, hindrances to international trade in agricultural and livestock products and, critically, from the arrival of new animal diseases. For those pastoralists who have settled in Jordan to escape war-torn countries, it means finding the strength and resilience to reinvent new livelihoods, with the scars of violence, trauma and loss, and without knowing when or whether, they will be able to return to home. Livestock is sometimes part of this new story.

Pastoralists’ pathways of adaptability and resilience are being challenged in several ways. There is intense competition for land, as it is privatised and as rangelands are encroached and fragmented; subsidies for animal feed have reduced incentives to manage rangelands through careful movement; there is high competition in markets from cheap imports, while only some gain access to lucrative Middle Eastern markets; and, above all, regional insecurity and the flow of refugees – many former pastoralists – has had major impacts on Jordanian pastoral systems.

The research project I’m working on with PASTRES explores how those contexts of uncertainty are currently being experienced and shaped by Jordanian and Syrian pastoralists. Building on the work of Professor Abu-Zanat, I will highlight the lessons that can be learned from pastoralists’ practices of adaptation to this context of acute competition and uncertainty. In future blog posts, I will share the stories of some of the Syrian and Jordanian pastoralists that are facing these challenges.